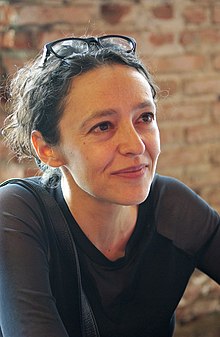 An award-winning Chilean writer and scholar teaching at New York University. Since 1998, she has authored a short-story collection, a play and five novels. Sangre en el ojo, was awarded the prestigious Sor Juana Inés de la Cruz Prize (Mexico 2012), as well as the Premio Valle Inclan Prize (UK 2019) for Megan MacDowell´s translation into English as Seeing red. Meruane has also received the Anna Seghers Prize (Berlin 2011) and Calamo Prize (Spain 2016), as well as literary fellowships from the Guggenheim Foundation (US 2004), the National Endowment for the Arts (US 2010) and the DAAD Artists in Berlin Program (Germany 2017). Her nonfiction writing includes an essay book Viral Voyages (Palgrave McMillan, 2014), a literary essay on her Palestinian origins, Volverse Palestina (Becoming Palestine, 2014) and a diatribe, Contra los hijos (Against children, 2014).

Lina Meruane is one of Chile’s most critically acclaimed emerging fiction writers. She is also one of a handful of Chilean artists and intellectuals belonging to the Palestinian diaspora. Her recent book Volverse Palestina (2013) uses the non-fiction genre of crónica to trace her family history of emigration from Beit Jala to Santiago de Chile. She then travels to Tel Aviv and various cities in the West Bank as a form of poetic memory. Meruane witnesses what life is like in the Israeli occupied territories and empathizes with others caught in the middle of the geopolitical conflict. Meruane navigates a precarious intermediary position both politically and culturally to create a first-person account of diasporic identity. Using Edward Said’s, Stuart Hall’s, and Marianne Hirsch’s theories of identity and diaspora, this chapter analyzes how the author’s expression of interstitial identity is developed in this crónica.

Manage Cookie Consent
To provide the best experiences, we use technologies like cookies to store and/or access device information. Consenting to these technologies will allow us to process data such as browsing behavior or unique IDs on this site. Not consenting or withdrawing consent, may adversely affect certain features and functions.
Manage options Manage services Manage vendors Read more about these purposes
View preferences
{title} {title} {title}
×
×