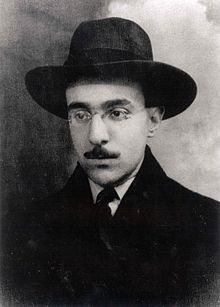 (13 June 1888 – 30 November 1935) was a Portuguese poet, writer, literary critic, translator, publisher, and philosopher, described as one of the most significant literary figures of the 20th century and one of the greatest poets in the Portuguese language. He also wrote in and translated from English and French.

Pessoa was a prolific writer, and not only under his own name, for he created approximately seventy-five others, of which three stand out, Alberto Caeiro, Álvaro de Campos, and Ricardo Reis. He did not call them pseudonyms because he felt that this did not capture their true independent intellectual life and instead called them heteronyms. These imaginary figures sometimes held unpopular or extreme views.

Honig was born in Brooklyn, New York. He earned a bachelor’s degree from the University of Wisconsin in 1941 and, after Army service in Europe during World War II, a master’s in English from Wisconsin.[2] He published ten books of poetry, eight books of translation, five books of criticism and fiction, three books of plays.

A Syrian-Kurdish writer and translator, born in Turkey in 1961. He translates from several languages. He published three novels: “The Mullah Papers of Saffron” 2005, “Salem Street” 2017, and “The Search for Azar” 2021. He translated a number of novels by Italian writer Ari de Luca. Lives and works in Oslo.

“After looking for him in the poems, we search for him in the prose. The pursuit of the Other in Pessoa’s work is never-ending,” writes Edwin Honig. Essential to understanding the great Portuguese poet are the essays written about (and by) his heteronyms—Alberto Caeiro, Ricardo Reis, and Alvaro de Campos—the several pseudonyms under which he wrote an extraordinary body of poetry. In Always Astonished, Pessoa and his several selves debate and discuss one another’s work, revealing how Portuguese modernism was shaped. Fernando Pessoa is one of the great voices of twentieth-century literature, and these manifestos, letters, journal notes, and critical essays range through aesthetics, lyric poetry, dramatic and visual arts, and the psychology of the artist. He gives us, too, a singularly heterodox political position in his strange work of fiction, The Anarchist Banker.

“Eloquent, volatile and obsessed with life—and death—(Pessoa is one of the) modernist giants in whose shadow we live and who made our century one of the extraordinary richness.”—The New York Times

Fernando Pessoa is Portugal’s most important contemporary poet. He wrote under several identities, which he called heteronyms: Albet Caeiro, Alvaro de Campos, Ricardo Reis, and Bernardo Soares. He wrote fine poetry under his own name as well, and each of his “voices” is completely different in subject, temperament, and style.

Manage Cookie Consent
To provide the best experiences, we use technologies like cookies to store and/or access device information. Consenting to these technologies will allow us to process data such as browsing behavior or unique IDs on this site. Not consenting or withdrawing consent, may adversely affect certain features and functions.
Manage options Manage services Manage vendors Read more about these purposes
View preferences
{title} {title} {title}
×
×